Good sex and union with the divine are two reliable ways to achieve ecstasy. Or maybe just one, when you think about it.

Some people seem to be born ecstatics. They make good poets. I had a friend like that, but western pharmaceuticals were able to cure it.

(Sorry, I slipped momentarily into one of the other great contradictions of despair – bitter humor.)

I’m taking it for granted here that I don’t have to explain despair, why, for example, W.B. Yeats wrote, The world’s more full of weeping than you can understand.

Leave a comment below if you feel I am wrong in this assumption. I will be glad to explain  human suffering, personal and social. That will mean a personal sacrifice because I am writing about these contradictions in order to avoid doing that.

The Sufis whirl in prayerful adoration of God. The 13th century poet, Rumi, born in Afghanistan, was a Sufi. His poetry has become widely known lately through modern translations like those by Coleman Barks. When the Black Dog of depression is shaking me by the back of my neck, I prescribe myself the rereading of Rumi: The Book of Love, to be taken 3 nights in a row at bedtime. I say 3 because I find, if I follow my advice, I forget to be miserable by the 4th.

Who comes or does not come, I cannot say. And yet …

Some of the Romantic poets have moments of ecstasy – Coleridge’s drug induced, Wordsworth’s more daffodill-ian. – but their broken hearts peek through in spite of resolute cries of Joy at that dawn it was to be alive/ But to be young was very heaven.

Others are flat out euphoric.

John Donne greets his wife, “And so good morrow to our waking souls/ That greet not one another out of fear. William Blake says, I love to rise on a summer morn. Emily Dickensen, I started early -Took my dog/ And visited the sea –

Teresa of Avila, a mystic who was canonized after her death in 1582, described the Devotion on Ecstasy as being where consciousness of the body disappears.

Leonard Cohen got the picture:
And so my friends, be not afraid
We are so lightly here
It is in love that we are made
In love we disappear. 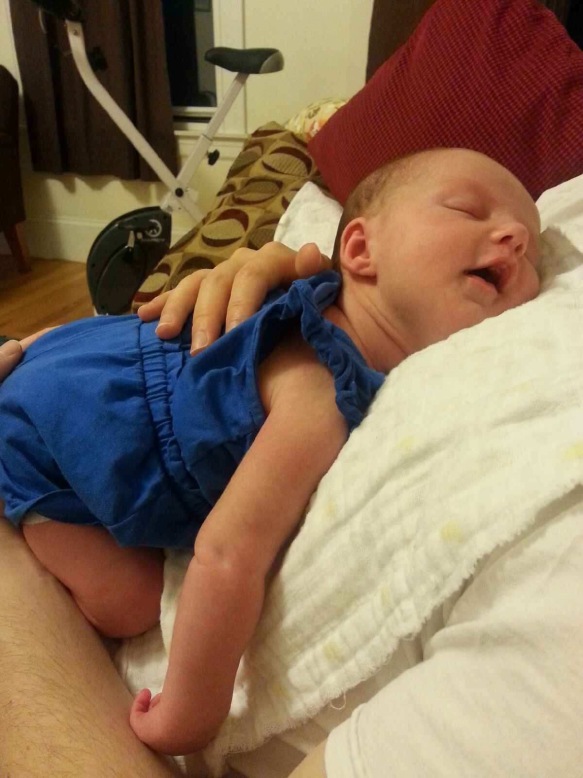 By William Blake
I have no name
I am but two days old.—
What shall I call thee?
I happy am
Joy is my name,—
Sweet joy befall thee!
Pretty joy!
Sweet joy but two days old,
Sweet joy I call thee;
Thou dost smile.
I sing the while
Sweet joy befall thee.
I have been reliably told that I spent the first months of my life crying inconsolably, and yet, I was called Joy. I was Joy for many years, unsuitable name though it was, until the people who called me that were gone, and I became Joyce. Even my children and grandchildren call me Joyce. I don’t complain. It is my baptized name after all, but I liked being called Joy. It reminded me that joy existed.
Just today, I got short video texted to my phone, which showed my 14-month-old great granddaughter rising to her feet, free-style with no support, and setting off to walk toward her joyful mother’s out-stretched arms, moving with sure speed toward laughter.
Joy is not contentment, nor even happiness. Dwelling in joy sounds challenging. Ancient Chinese medicine warned that excessive joy damages the heart. We are told that winning the lottery is a stressful experience, for example, and can lead to negative outcomes.
I have known only one person who came anywhere near dwelling in joy. That was my Aunt Mae. I didn’t see her often because I lived hundreds of miles away from her, but when I went back to visit my grandmother, I always walked to Mae’s tiny house under the mountain. The last time, I did so, I was with someone, my sister perhaps. As we neared the little porch, we could hear her singing. She had always had a dreadful voice and she was belting out, Jesus Loves Me at the top of it. It took a while for our knock to penetrate her ecstatic hymn. Then she threw open the door and cried out with such welcoming love that you would have thought Jesus himself had come to see her.
Mae had seen many dreadful things in her life and suffered poverty and abuse. I had watched her grieve enough to finish off most people, but now in her old age with legs like stove pipes and the agony of a declining body, she was joyful.
When I think of her, I can’t decide whether she was a saint or senile, an old fool, she would have called herself.
I propose to continue my contradiction by looking at ecstasy, contentment and happiness in future posts in order to set them against the deep and abiding depression that I share with several others in my life.