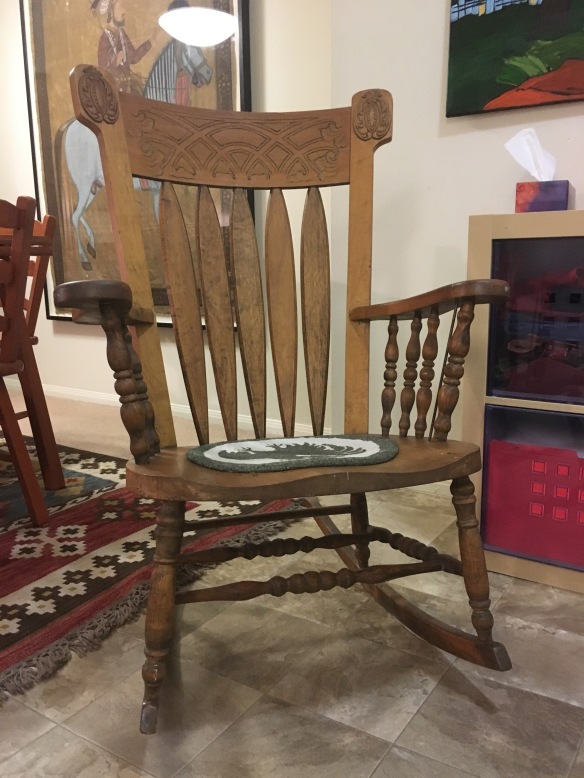 This is the crying chair. It sits in my entrance way on a tiled floor. Good rocking there and tissues at the ready.

I saw it first at Christmas 1960 when I dragged my extremely pregnant body upstairs to my mother-in-law’s attic. She was storing it for a friend, but I could have it to rock the baby, temporary loan.

It was cream colored then. At some point, my husband painted it antique green. (When was the era of antiquing?) During a desperate teachers’ strike, our house became the place for coffee break. Deep winter. Constant arguing. Months of poverty. My two children unschooled as well, of course. To avoid insanity, I carried it down to the basement and stripped the paint off and oiled it. I loved the chair. It saved me.

I rocked my large self in it through most of a dark January 1961. When she arrived, my daughter, like her mother before her, cried. If she had cried for Canada, she would have won the gold. My father slept with his foot out of bed rocking my cradle. I rocked her in the big, comfortable chair. 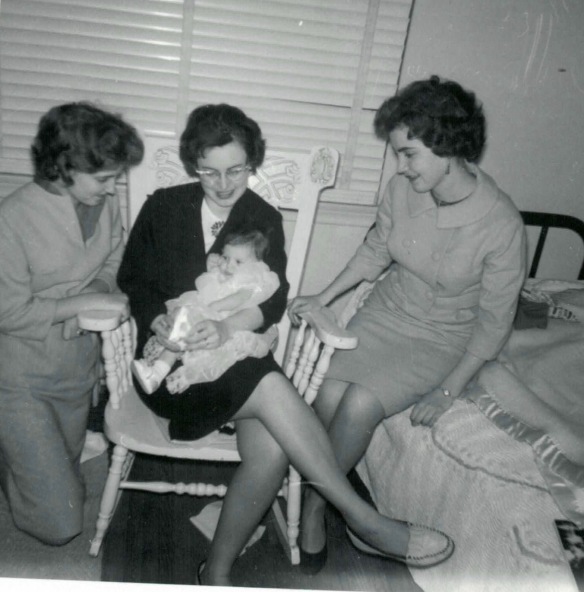 Her brother arrived a year later. By then his sister was noshing on pureed food, so her colic had cleared up. Anyway her real live doll-brother made her so happy, she didn’t need to cry. He, in turn, was fascinated by her -his own non-stop performance artist/teacher, and calm by nature. Still I rocked them both before bed and at teething time, one on each knee, singing every song I knew including ‘House of the Rising Sun”

Some nights, however, I cried as I sang. Their father taught day school, night school, took night courses and tutored on Sunday. We had dinner together. That was it. A quiet, tasteful time, full of conversation. No. Two babies who needed to be fed while Daddy tried to sort out the evening lesson plan.

I had studied English & Philosophy and Drama. I was the only female survival in the Logic class by third year. I had two years of teaching English under my belt as well as teacher training. I had subdued 50 hormone-ridden grade 10s in a classroom with 48 seats. Now I was washing six dozen cloth diapers twice a week.

I started reciting Shakespeare as I bathed the kids together in the big tub.

Eventually, my husband intervened. “What would you do right now, if you could do anything?” he asked. “Put on my navy suit,” I said. “Where would you go?” he asked. “Cedarbrae Collegiate,” I replied. “You want to go back to teaching,” he said.

How could I? It was 1963. My job was to nurture these priceless babies. It just wasn’t done. But before we got up from the grey card table that functioned as our dining surface, we had the plans underway. We would hire a nanna, carefully vetted. I would get a job easily. Populations were booming and my clever husband could stop working all the time. My terror and relief could be soothed only by more rocking those bigger and bigger babies.

The rocking chair went with us to a new house. We were now making almost $12,000 together. It was an ideal place for growing children, a hill, with a flagpole and a martin house, wilderness, gardens, fences and eventually a pool. There were parks galore and a very high cliff above Lake Ontario for risking young lives. Not that we worried. They had bicycles. They had each other.

The rocking chair sat in the corner of the rec room beside the sliding door and in front of the fireplace, which any of the four of us could choose to light. Nanna kept it swept free of ashes.

Then the crying chair came back into its own. I was the one in it. It was 2 a.m., where was my husband?

The chair and I set out on our travels. Sans the others. We moved to Heyworth Ave., to Main St., to Fishleigh Dr., to the town of Zephyr, to Mississauga, to Evans Ave., to Stephen Dr. and back to Mississauga. I can picture where my chair sat in each of these places. All except 3 had my name on the deed. One had my sister’s and two I signed leases for. A good deal of rocking and crying went on in those 40 years.

Meanwhile my ex-husband had lost his much younger wife to cancer. He had been diagnosed with stage 4 cancer the same year, 2010. We welcomed him back into the family at Easter 2012. (“Should of stuck with the old girls,” my sister greeted him cheerily.

He and I had lunch last week. A two hour lunch tires out this 82-yr-old retired teacher, but he seemed to want to come to my 14th floor suburban apartment. We did have to talk over a few details concerning his estate. There have been no bad tests recently but…

I pointed out the crying chair. This sent him into a reflective mood. He always cried easily-just maybe not over me. Intimations of mortality can bring that on. He regretted our son had not continued his painting and sculpting. I thought that a youthful art career is like a teen-aged rock band. Most people grow out of it.

Hubby, for example had chosen math and physics, over art. Even got to work with a nuclear reactor. (Is that significant?)

Anyway, grief is always the same, not so much about loss as the f-ups that we regret.

So the chair waits invitingly, inevitably.

Feel free to drop by and cry until you’re done.