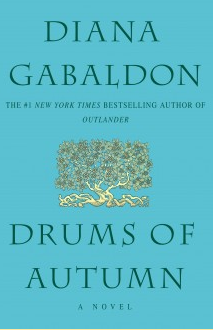 Okay, now I’m taking moral advice from a romance novel and me a philosophy major!

I’m nearing the end of this book and shamefully already plotting to order the fifth on my iPad. I used to have such refined tastes in reading. This book is not just a bodice ripper. It’s a skirt ripper and a shift ripper. Drawers or underwear are just removed and so require no mending. Mending is a big deal in the 18th century. Clothes are frequently reduced to rags and then replaced miraculously by a rich and generous, usually new-found relative. (How come I never find mine?)

But enough levity, now to the serious moral question.

Jamie, now in his 40s and living in 1760s North Carolina has a heart-to-heart discussion with a time-traveling woman on the subject of rape and whether vengeance or forgiveness is the appropriate response.

Both have some experience of rape as a good many of Gabaldon’s readers do, no doubt. Either she does or she has done good research. Since we are dealing here with the Highland clan warrior culture, killing the assailant is presented as an option. Those of us reared in the Christian tradition, even if lapsed, don’t leap to that as the answer, but hang on, Jamie is Catholic. Maybe it’s more a personal response.

This series is long and over the years, Jamie has discovered that time takes its own revenge and forgiveness is the better option.

Here is where the Gabaldon’s insight comes in: Jamie says that it is an on-going process that has to be renewed each day. I have noticed that myself and forgiveness comes harder some days.

Some days the whole terrible episode gets re-experienced in vivid detail, as it does for Jamie after that conversation, as it may well do for some readers after they read this part of the book.

On such a day, you can feel raw, as if you have no protective skin. No use even aiming for forgiveness then. Best to sit on a porch swing listening to the pine trees purr, watch the flitting birds, raise your eyes to the mountain ridge. Do something peaceful and healing wherever you are. Forgive yourself for hurting.

Did you consider calling your son, Goliath? Would you tell him to go to the best university possible? If he were murdered, could you forgive his killer?

Malcolm Gladwell’s latest book is David and Goliath: underdogs, misfits and the art of battling giants.

David is one of my favourite names. It means “beloved of God” and denotes a hero and a poet. In 1 Samuel 17, we read of David’s exploit as a young shepherd sent to take food to his brothers in the front lines of Saul’s army as they face off against the army of the Philistines across the Eloh valley. Things are at a standoff. Neither army will venture down from the safety of the hills. While David is there, the giant Goliath, armed to the teeth with spear, sword, and javelin and wearing full body armour and helmet, issues a call to single combat. When no other Israellite answers it. David steps up. He declines Saul’s armour and runs toward Goliath with his sling whipping. The rest is history.

Power is not always triumphant. Giants can be felled.

Gladwell goes on to consider how a disadvantage, like having dyslexia or losing a parent at a young age can have a positive effect. Twelve of the first 44 presidents of the United States, from Washington to Obama, lost their fathers at an early age. (p. 142) Emiel ‘Jay’ Freireich who pioneered a cure for childhood leukemia lost his father and had a truly awful childhood. The strategies we develop to cope with our disadvantages have a way of lifting us out of the ordinary. If….

My own life illustrates the “if” – if at least one person in the situation, the brutal childhood, for example, supports and believes in you. My Aunt Mae did that for me and my sister and we were able to pass it on to our siblings.

Then he tackles advantages like getting into a great university. Trouble is even if you are very bright, you may find yourself feeling stupid compared to your classmates because they are even brighter. Discouraged, you may drop out, whereas, if you had been satisfied with your second choice, you would have stayed the course.

One chapter considers the trickster in folk mythology and how enslaved people saw Bre’er Rabbit as a model for dealing with oppression. It’s all about not getting thrown into the briar patch. Oh, please Mr. Bull Connor, not the briar patch. A careful examination of an iconic photo – a police dog attacking a boy – astonishes.

Throughout the book, Gladwell uses the u-shaped graph to show that good effects can result up to a certain point, but past it, things go down hill. He relates this to class size, California’s Three Strikes Law, and even wealth itself.

The Nazis bombed London night after night expecting to demoralize the people into defeat. Churchill and his researchers had predicted this would happen. Mental hospitals were standing ready. Didn’t happen. Rather the opposite. Londoners remained calm and carried on. The looneybins stood empty. Has to do with the difference between a near miss, which is very traumatic, and a remote miss. People who survive a remote miss, and they were in the majority, actually conclude “that wasn’t so bad”: they have defeated fear.

Two of the most affecting stories are those of great forgiveness and great courage. A mother forgives her daughter’s murderer and a group of Huguenots in a remote area of France not only defy authorities during the German occupation but send a letter to the Vichy government saying, “We feel obliged to tell you that there are among us a certain number of Jews.” And they prevailed.

What a hopeful and encouraging short read.