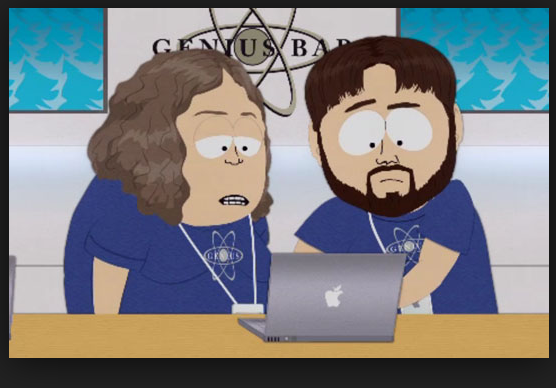 On Sunday at 2:15, I have an appointment with an Apple Genius at Sherway Gardens. I bury my late-rising self in the Saturday papers for too long, and when I raise my head civil war breaks out.

Hips demand exercise. Sorry, Hips, I say, I’ve done Feet. No time for you. I need to spend that half hour on Mind and its buddy Computer. I’ll get back to you later this afternoon. Then I stand up.

“See,” yell Hips. “We’re all seized up. You should stretch one minute for every year of your life.”

“Like I’ve got an hour and a half every expletive day!”

Mind, tyrant that it is, does what it wants, and uses up the half hour.

So I arrive at the Genius line more or less knowing what my computer problem is.

In front of me is a beautiful boy. He has apparently tagged along with his parents, probably bored out of his mind. But no, the adults go off with their Genius, and the boy remains. Is he 12? Maybe a young-looking 13? The next Genius leads him away, asking,”What do you want to work on this time?” The boy begins a lengthy answer, not a word of which I understand.

My Genius shows up. I ask him to repeat his name. It is Chinese and sounds like the French word for yes.

I haul out my Mac Air Book-3 years and 6 months old, no longer covered by that expensive extended warranty. “I have been leaving it on because it takes so long to reboot, but it shuts off while it’s sleeping. When I go back to it, it won’t turn on until I plug it in. The battery still has a charge, so that’s not the problem. Then it takes forever to boot up again.”

He starts tapping keys. “First of all, you need to turn it off as often as possible. We’ll get rid Rapport. I know your bank told you to run it, but you don’t really need it. The bank site is secure enough. I find people who have it complain their computers run slow. Then we’ll take out this. I’ll leave this window open and when you get home, plug the computer in and click “Turn off file vault.” I check it out. Who knew I was encrypting my files.

Okay. We must have used 3 already.

He reboots the thing. It’s already faster and no longer black and white when it asks for my password.

“ICloud isn’t really for photos.” He grabs my iPad, plugs it in and in a trice loads my photos there as backup. “I’m like a car mechanic. I fix things. I’m not really a teacher. Come to classes where the teacher is good at that. Here’s the screen for quitting File vault again.” Then he adds, “I suppose you don’t turn the iPad off either.”

Okay, I wonder, does he want me to turn off my iPhone as well? I don’t ask. I give him my humble thanks. I figure he just came out ahead by at least 5 minutes, kind of a slam, bam, thank you situation.

As he departs backstage, I rise from my high stool. My bags are on the floor. How did they get so far away? “See,” yell Hips. “You need to do a full set of Tai chi, not just the exercises and not just those stupid Yoga stretches.” Stooping is not going to work.I creak forward in a deep bend from the waist. Central Back screams. I stagger down the aisles of people, some of them four-years-old, playing with chained-down devices.

Across the way is a Pottery Barn outlet. Maybe I could just saunter around it. Who knew Christmas shopping started before Remembrance Day? I sidle through the crush. I never shop in stores now. See Hips above. But I spot red lunch plates, only $9. I really really want lunch plates to go with the Fiesta Ware I received when I turned 70, but have you see the prices?. $40 later, I have a huge box of plates. I get to the outside door, but before I press the button to open it, I go back to the store to ask for a bag. Carrying the heavy box has threatened to tip me forward.

Starbucks is jammed, but a welcome rest stop.

I am parked on the deck, way out beyond civilization, past construction. I see there is a yellow hatching on other side of the road for pedestrians, complete with barriers. Cars without parking spots are cruising nose to tail slowly around blind corners. Pedestrians on the other side are flattening themselves against hoardings as I did on the way in. The walkway I’m on is more roundabout, but finally, it leads me across the road between cars to a seven inch curb painted yellow. Okay. There’s a low wall on the left. I put one hand on it to balance and step up, ignoring Hips who are crying out in agony. I glance right. A good-looking young man is looking at me. He smiles his congratulations. I’ve made it.

Good-looking young men used to check me out for a different reason.

Hips and Feet, with a little help from Legs, approximate walking all the way back to the little red Yaris.