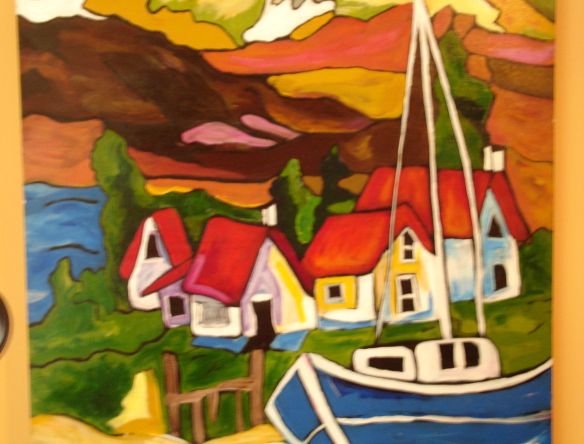 My title is taken from Robert Lowell’s poem, Home After Three Months Away in which he observes his toddler daughter and himself after his stay in a psychiatric hospital. His central image is one of shrunken dried out toast, hung as bird feed by the tyrannical ex-nurse. I like the title, but my own experience is quite different. I wasn’t in re-hab. I wasn’t even a patient, but I returned after a long absence to find myself much changed and for the better.

I was surprised by change, rather than dried out sameness. Wow, I have a new kitchen tap. I have new phones. True I had bought them, but I had forgotten. I stood for a long time, trying to figure out where I kept my mugs. I knew where they were in both houses in Pine Mountain Club, California. Now, logically, where would they be in my house. I took a chance they were near the glasses and there they were. What did I used to use to carry dirty clothes to the laundry room. Not a basket. I know I used something; otherwise socks escape all the way down stairs. Ahhh, a plastic bin, stored in the closet.

I came into the apartment to be met by heat and the sound of electric fans. It was very hot. “I turned on all your air filters,” Georgia had told me on the phone. That puzzled me. I have only one. She had turned on that and two small heaters that I had been using on cold spring days, once the furnace was turned off.

There were vegetables, bread and cookies in the fridge. I could actually have a chicken sandwich for dinner. All of the clocks except the one on the PVR were an hour out. The audio unit was doing a light show – the power had gone out.

But the place was dust free, it had been aired and the sheets changed. The mail had been sorted and discreetly placed so I could ignore it. The one letter that might cause me angst, opened and summarized for me. An old friend still didn’t want to speak to me, but Revenue Canada had given me back $200. Armed with this information, I ignore it.

True, I also met my terror at receiving the call that led me to leap on a plane to L.A. reassured it that all was well and moved on.

I ran the water filter a few minutes and had a long drink of familiar water to quell the dehydration of the flight home.

I called Georgia to anchor myself in Toronto and then I called Pine Mountain Club because I needed to extend my long-distance love connection and get the latest medical report.

I vowed in early June that I absolutely would not leave until I felt our patient was stable and unlikely to relapse. I vowed it fiercely. I put up with major inconveniences, like living two months in a hotel and two more with Clara. I put up with no car, no internet and no phone of my own. I found ways to cope – a hot wire, Skype and a golf cart. I put up with the occasional hint that now it was time to leave. I was adamant. When I decided to leave, I booked three weeks in advance. Even that three weeks showed significant health improvement.

Phone calls over, I went out to discover my almost new car was full of gas and it started right up. I drove to my favourite restaurant, where the dining room was closed. At 9:30????? (Oh right, I’m back in Kansas.) The bar was open, so I ordered a dark beer and the most expensive item on the menu, lobster jambalaya. I pulled out my iPad, turned on night vision and dived back into the 6th Outlander book, Snow and Ashes.

I was home after five months away, a more solid and whole person, an easier person to be. I knew when I left that our patient was better and so was I. Two heal faster than one.

1 thought on “Home After Five Months Away”