(Part of an on-going series about my estranged son.) 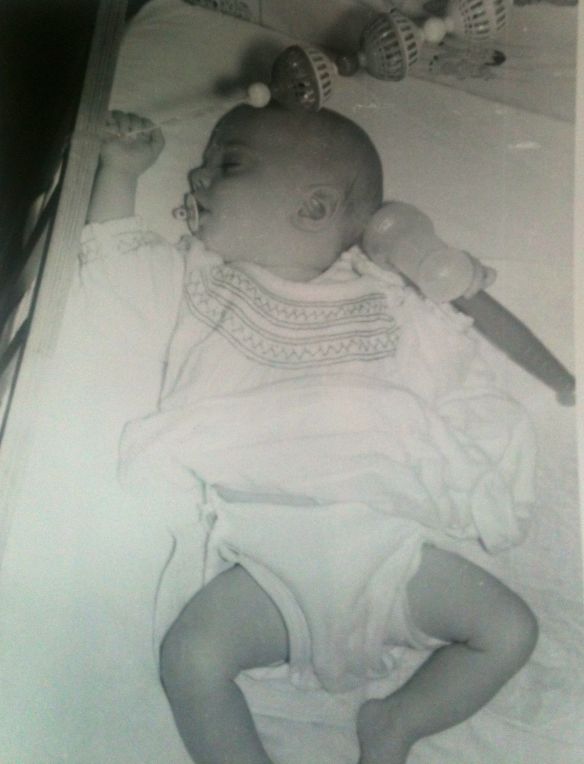 So we came home from Mt Sinai Hospital, Daniel and I and the red roses. Blake went off to collect Julia from the babysitting friend’s house and I put the sleeping baby into the baby carriage that served as a bassinet and lay down to rest close beside it. I had missed one-year-old Julia badly and wondered how she would react to this little rival.

In a few minutes, I had my answer. Her father put her down on the bed and I picked up her brother. Her face was suffused with joy. In her excitement, she leapt to her feet, over-balanced on the mattress and crashed to the floor, hitting her head and howling in pain. Blake rescued her and sat down to comfort her. She really was hurt.

Daniel barely flinched at the noise. He slept on. Evidently, this was a different sort of baby, a calm infant, not given to nervous response.

In a few minutes, Julia got over crying and leaned her tear-stained face in to kiss her brother’s round face. The next minute we were all laughing. As far as she was concerned, I had brought home a living, breathing doll for her to play with.

And he happened to be a boy. In those days, there was no way of knowing that before hand. Older women would whisper,”She’s carrying low. Must be a boy.” They had said that throughout my first pregnancy. That worked out! Boys were scarce on the ground in both families. Although Blake’s father had been one of many boys, Blake was the only one carrying the Durant name in his generation. Now there was Daniel Durant. And the only male member of my family was my little brother, Rob. My father was a man who wanted male heirs, hence my sister, Georgia’s name. Blake was pleased as well, although lineage meant little to him.

And me? I was intrigued and a little unnerved. But it didn’t take me long to learn to take evasive action while changing diapers. One face full of pee was enough.

The thing about little Daniel was that he was quiet. At first newborns don’t seem to realize they’ve been born, but even when he got past that sleepy stage, Daniel was quiet. For one thing, he was well-fed. Bottle-fed. Not from choice. Not many mothers breast-fed in those days – 1962. I had been determined to, a year before, but it hadn’t gone well. The head nurse had screamed at my left breast’s in-turned nipple and then screamed at my doctor’s incompetence. My own mother and mother-in-law just shook their heads silently over my outrageously old-fashioned idea. My grandmother seemed to have forgotten the “unpleasant” experience. I had no friend, no group support. And Julia lost weight in the process of a session of nursing and screamed in starved protest. When she was a week old, we boiled up the bottles and began to give her formula. Now, a year later, she climbed on the traitorous mattress, sat beside me and watched me feed her brother his bottle.

He had to be Danny because Daniel was too big. 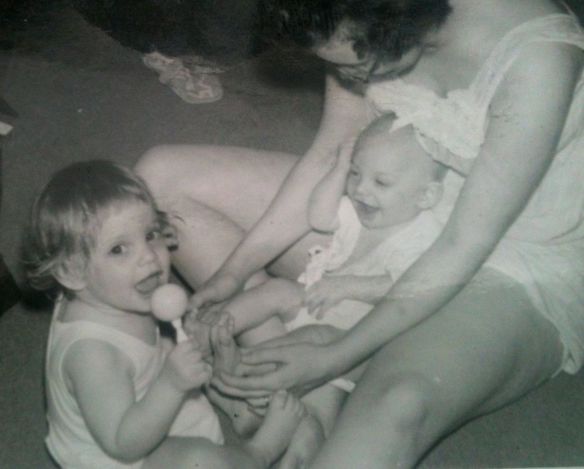 My idea of heaven was to get them both down for a nap at the same time although, of course, Julia was often busy pulling every pot and pan out of the kitchen cupboard and bashing them about while he slept. I was considered a very liberal mother for permitting this kind of kitchen chaos.

There were two baby cribs in the bigger bedroom and a second high chair standing ready. There was a playpen for containment of joyous energy when necessary.

Mostly we three were alone. Blake taught math in North York, 40 minutes away and returned there two nights a week to teach night school. On Sunday mornings, he went out to tutor an adult student. We were trying to make ends meet. So as I worked I listened to the CBC, especially from noon to 1:30 when books were read aloud. We listened to popular music as I worked or I sang to them. I loved singing and still had a voice. They seemed to like the singing and danced as small children do. Once he got into his high chair, Danny waved his arms and jumped on his seat. Or he bounced in the Jolly Jumper which hung in doorway. Later, Jolly Jumpers like bottle feeding, got a bad rap, but what did we know?

We moved when Danny was six months old. Long story there – adult only apartment building, furious neighbours….. Besides we reasoned, children need a yard. So we rented a house and moved to the Bendale subdivision in Scarborough. It had only 600 square feet, but it also had a finished basement room, with good big windows. Once again, we kept them together in the biggest bedroom, so they could keep each other company. One of the things I have stood charged with as a mother is not providing visual stimulation for these budding visual artists. Apparently, the only wall decoration was a blue thing, that I was able to identify to the adult complainers as a thermometer.

We had had to leave Dr Anchelson behind since I didn’t drive. We had only one car anyway. So I found a new doctor around the corner on Lawrence Ave.

One day, I loaded them both in the buggy and cut through the walkway beside the Catholic Church and School to his office. All morning Daniel had been crying and pulling at his ear. Holding him in my lap, I told Dr. Isaacs that he had an earache. Carefully, he examined Daniel’s ears, first one, then the other. Then he turned to Julia, who was standing beside us, and examined her ears. “This one has the earache,” he said, pointing at her.

In a nutshell, that explains why Daniel, as an infant, was unknowable. He and his sister acted as one organism.