It rained heavily all morning while I read the weekend papers, all lights on to brighten the gloom. Then the rain grew lighter and at some imperceptible point, stopped altogether and the sun began to break through. By late afternoon, it was a real June day. I knew it would be too wet to go up through the woods to my favourite walk on the ridge trail, so I chose the paved bicycle path instead.

It turns out that I don’t need to go into the woods because it is breathing out on either side of the path, a moist, woody, green exhalation like a blessing. A stiff breeze draws my eyes upward. I have not realized how tall the trees are until now nor how many of them are poplars. The wind catches the tops, tossing them first one way and then another, moving wave-like across the height. The poplars sing as they stir. Poplars have always spoken to me. They stood close in by the first home I remember and danced in slight air currents when all else was still. 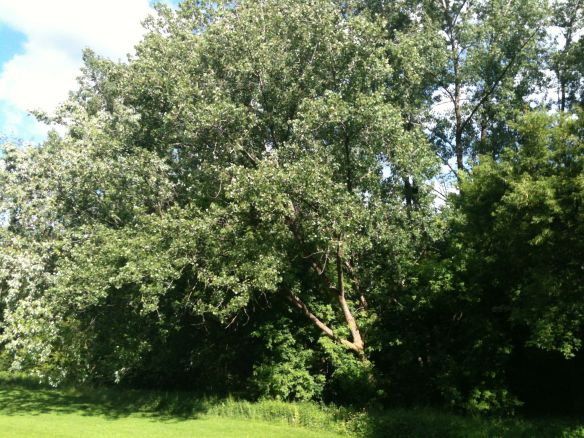 The path emerges from the shade of the woods to a crescent of mown lawn lying open to the sun. I go as far as the culvert that carries the little brook under the path. The brook edges the woods here, dividing it from the lawn, flowing under ferns and low branches. Today it is babbling busily with the runoff. I wish I could capture its bubbling music.

One cardinal has been singing as I walked and I catch a glimpse of his vivid red and his crested head as he leads me away from his nest. I cannot follow him. I do not fly.

The half hour’s walk has been quiet and contented, easy and relaxed.

Earlier in the day, I listened to author James Lasdun being interviewed mainly about his recent memoir Give Me Everything You Have, the story of his 5 year ordeal at the hands of a cyber stalker, a writer and former student whom he calls Nazrin. Initially Lasdun helped her by sending her novel of life in repressive Iran to his editor, but then Nazrin turns on him, accuses him of stealing her book and selling it to other Iranian writers who publish her stories. She goes on to accuse him on “Comments” of drugging and sexually assaulting women. She caps this by emailing him increasingly violent anti-Semitic threats. None of it is apparently bad enough to merit police action, particularly since Nazrin has left New York City for Los Angeles and is outside of Lasdun’s available police jurisdiction.

Lasdun’s mind is more and more taken up with the harassment. He becomes obsessed with it.  He begins writing an account of what is happening as documentation and the account morphs into a book.

One of the central images he uses in the book is that of Sir Gawain and the Green Knight. The Green Knight rode into the dining hall and challenged the Knights of the Round Table to cut off his head, promising that in a year and a day, he would in turn, cut off his beheader’s head, a give-me-everything-you’ve-got challenge if ever there was one. Sir Gawain beheads him. The Green Knight takes his head under his arm and rides away. Now the real story begins.

Since Lasdun published his book, several other people have contacted him to say that Nazrin has also stalked them. Meanwhile she has stopped communicating. Now there are moments, Lasdun says,when he realizes that life can be inconsequential.

Having had an interesting life and having spent a good deal of it dodging and weaving in expectation of the Green Knight’s revenge, I was grateful to be reminded that life can be peacefull and I carried that comfort with me as I took a walk on a breezy late afternoon in mid June.