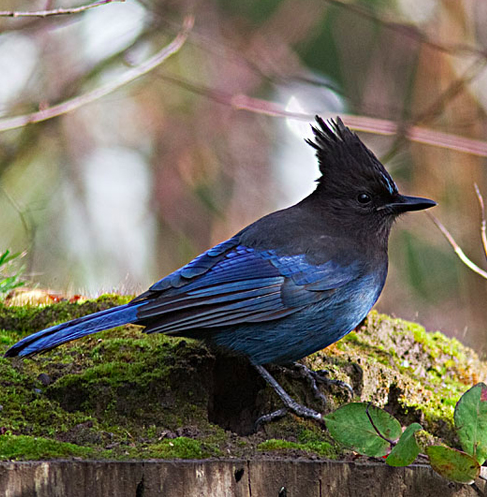 As you can see the Steller’s jay does have some blue and the same  kind of crest as the blue jay, presumably a cousin, but no white or grey on its breast. They live in the forested western mountains of North America.

Jays in general have a raucous reputation, but the Steller’s that live near the house in the pines give a whole new meaning to the word. The deck is theirs. If you decide that you, a mere human, want to sit there, one of them will sit above you in a nearby pine and give you orders to move on.

They have a variety of calls, including this scold:

Like other Jays, the Steller’s Jay has numerous and variable vocalizations. One common call is a harsh SHACK-Sheck-sheck-sheck-sheck-sheck series; another skreeka! skreeka! call sounds almost exactly like an old-fashioned pump handle; yet another is a soft, breathy hoodle hoodle whistle. Its alarm call is a harsh, nasal wah. Some calls are sex-specific: females produce a rattling sound, while males make a high-pitched gleep gleep.

The Steller’s Jay also is a noted vocal mimic. It can mimic the vocalizations of many species of birds, other animals, and sounds of non-animal origin. It often will imitate the calls from birds of prey such as the Red-tailed Hawk, Red-shouldered Hawk, and Osprey, causing other birds to seek cover and flee feeding areas.[3][4((]Wikepedia

These Steller’s have an elaborate game going on. They spend hours carrying twigs and softer materials like bits of plastic to a beam that extends out of the house and over the deck for 12 to 18 inches. Everything they painstakingly place there falls off onto the deck, making a large pile 5 inches deep in a couple of days. One day, we observe a Steller’s, sitting on the deck rail, read the riot act to one of the builders. I imagine she is saying,” First of all, Idiot, we build our nests high up in tall pine trees. Secondly, you need mud.”

“We need to put out water,” I protest to the householder.

“There’s a lake just down there through the trees,” she replies.

Some scientist on-line tells another inquirer that such piles are food stores. Wrong. There is absolutely nothing edible on these tiny pieces of wood.

To me the builders – at least 3 – seem slightly smaller than other adult birds. Are they teenagers trying to get the hang of nest building? 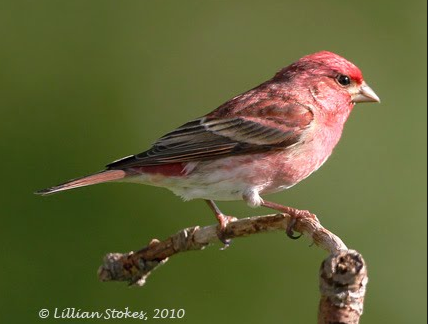 My Steller’s observation is interrupted somewhat by my move to the boxcar house which is more in the open, a suburban part of the high desert town.  What was once lawn is now bare earth with scrub. There is an on-going drought. But near the sliding door to my bedroom at one end, bushes still flourish and it is there that a finch sings evensong.
I never actually catch a glimpse of this bird, which seems to have roosted for the night in the dense foliage, so I cannot say which type of finch it is. But the song is long and very melodic. It stops singing at the moment that dusk fades into night.
House finch song [embed]http://www.allaboutbirds.org/guide/house_finch/sounds[/embed] 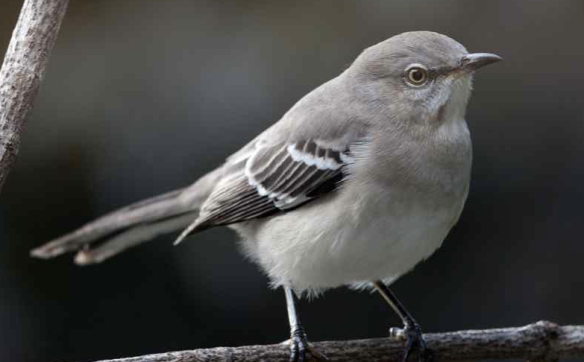 The mockingbird doesn’t live up on the mountain, but I got to enjoy its sweet song at both ends of my California visit when I stayed in a house in Culver City. Years ago when my children were young I taught Lee Harper’s novel To Kill A Mockingbird. Never having actually heard one, I had to imagine how beautiful its song must be to lead Atticus to tell his children that it was a sin to kill a mockingbird. Stepping out of the car in Myrtle Beach, South Carolina, one March break, I finally did. That song alone kept me coming back for years. Then when I began visiting Los Angeles, I got better acquainted with its beauty, particularly the year I stayed in El Segundo where one liked to sit in a tree high on the hilly roadside or on top of the roof to sing its heart out. To my great joy, mockingbirds turn up some summers in the Toronto area. One of them loves to sit on a high lamp post at my local mall and celebrate life.

As their name suggests they imitate other birds and sounds they hear, car alarms, for example, so one sample isn’t really going to do the job.

1 thought on “Bulletin from Shangri-la #6: birds”