April Crocus in the Rain

Chaucer begins The Canterbury Tales with a jaunty tribute to April:
When that Aprill with his shoures soote
The draught of March hath perced to the roote,
And bathed every veyne in swich licour
Of which virtue engendered is the flour
……
Than longen folk to goon on pilgrimages.

When April with his sweet showers has pierced to the root what March dried up and bathed every vein in such moisture… then people long to go on pilgrimages (chiefly of course to Canterbury.)

And so a knight, his young squire, a yeoman, a prioress, a nun, a monk, a friar, a merchant, a clerk, and a dozen others, including the Good Wyf besyde Bathe set out on horseback to pray to “the blisful martir”, St Thomas Becket. On their way, they pass the time by telling each other stories, some chivalric, some edifying and some downright raunchy. 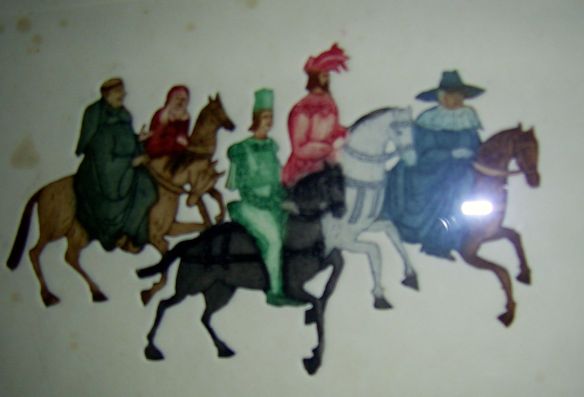 T.S. Eliot, on the other hand lamented in “The Waste Land”
April is the cruelest month, breeding
Lilacs out of the dead land, mixing
Memory and desire, stirring
Dull roots with spring rain.

Sounds a bit negative but then, this part of the poem is called “The Burial of the Dead”. Eliot felt that life, devoid of meaning, is death, while death, if sacrificial, is life-giving.

Vernon Duke, songwriter, celebrated April and Paris:
April in Paris, chestnuts in blossom,
Holiday tables  under the trees,
April in Paris, this is a feeling,
No one can ever reprise.

Lucky Paris! The chestnuts in my town won’t bloom until the end of May.

What do you make of April?