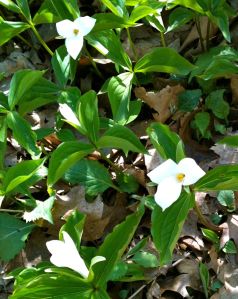 I went to the woods to see how the trilliums were doing.

It has been an exceptionally early spring here in Toronto after an unseasonably warm winter with very little snow. They say things are about a month ahead. The magnolias paid a price for early budding when the temperature suddenly fell below freezing, but many of them just marked time in the bud stage and opened up in pink glory, only a little brown at the edges, when things warmed up. Now light green leaves are feathering out on some trees, so the trilliums, I reasoned, should be blooming before the trees cut off their light.

Trilliums have a sort of magic about them. They are highly regarded here because they are Ontario’s floral symbol and school children are taught NEVER TO PICK THEM because they will not grow back.

I had walked down the paved bicycle path into the park but left it to cross a culvert over a brook and climb up into the woods. The woods grows on sand dunes left here by an ancient lake, so there are sunny hillsides under the trees and it was on one of those that I found the trilliums. The lily of the valley leaves had also pushed up and were waiting their turn to unfurl with their heady perfume and a few violets lined the path.

I followed a freshet on a rough path, climbing over tree trunks, which on a warmer day would have tempted me to sit and stare. I came to an open field, already mowed, where families like to come to picnic. Then I turned east and began the climb onto a high ridge. Here the trees were still bare, but the bushes were green and there were masses of white flowers, which I have yet to identify.

There has been a tidal wave of butterflies this spring, mostly red admirals. One report told of a backyard covered in 2000 of them (How did they figure that?) Some of them were sunning themselves on the ridge path and as I approached they flew up and chased each other in circles. I was still wearing a huge grin when I met a man and his dog.

On one side, I looked down into the woods and on the other out at the city -street, railway, freeway, high rises, and beyond them Lake Ontario, deep blue for the nonce.

The week had brought a weight of difficulty as weeks often do. There were unresolved problems and uncertain outcomes. There was negativity to be processed. But here there was a sanctuary in the woods. Here there was stillness that comforted. Here there was peace.

Have you found such a place lately? Perhaps it was not even external. Perhaps you found it within. Tell us about it.