I woke up to Ian Tyson singing Somewhere Over the Rainbow. Siri had slipped her leash and shuffled from White Noise on repeat.

I don’t need to tell you, dear constant reader, that that song is from a famous movie

The first real movie I ever saw was The Wizard of Oz. I was probably 8-years-old. That was 1944. In the province of Quebec, children were not permitted to go to movies, ostensibly because of a terrible fire in a theatre that had killed children, but, more likely, the Catholic Church deemed movies corrupting. The Catholic Church ruled in the mostly French province.

I had seen films, made by the National Film Board of Canada in class, quite a few of them. I think the projectionist made a circuit of the schools, English schools in my case, and we got to see whatever he brought whether it related to the curriculum or not. So I was already enraptured by flickering motion pictures in a darkened room, but the moment when Oz burst into colour sealed my fate.

Quite simply I had to go there.

True my life did not include tornadoes, but it did contain World War II, which I initially thought was right next door. Uncles were overseas, German prisoners kept escaping from the POW camp in Sherbrook and my friend’s uncle got shot down and died. Plus there was the on-going war at home, not just the struggle to live on little money and rationing, but the very real possibility that my father would eventually succeed in killing one of us.

Eventually, I realized Oz didn’t exist and I would have to make do with Hollywood. My Aunt Mae could tell the future and she said that yes, I would go there. I wasn’t clear why she was laughing as she hugged me close.

I kept scrap books of movie stars and pursued an acting career. I had a few gigs at Christmas concerts and variety shows. I did Burlington Bertie from Bow, like I saw once in a movie. I got the lead roles in half a dozen high school and university plays. The only movie role I was ever offered got cancelled before shooting started. But I did go to Hollywood. Over seventy times and I plan to return in a few weeks.

Spoiler alert: I produced a daughter who went there to live and she produced two sons. I starred as grandma. Daddy #2 introduced me to a movie star at whose Malibu beach house I stayed. Her present husband took me to Warner Bros and we ate in the commissary. I didn’t get to go to the Emmys with him, but who can complain.

So thank you Aunt Mae. You kept hope alive and you didn’t exactly lie.

I woke up thinking about dreams, the kind of dreams you have about your future and which I am informed are essential to a happy life.

Shall we count them up?

I dreamed I would have 5 children and live in a ranch house. I had 2 and lived in split levels. I dreamed I would go to university. I went to McMaster University in Hamilton Ontario and lived for 2 years in a beautiful residence called Wallingford Hall. (I won’t mention the Quoncet hut  I lived in in first year.) I learned a great deal about English literature and philosophy, and continued to do so at the University of Toronto, almost dreaming spires. So check and check.

I dreamed of going to Europe and seeing Paris and the Greek ruins and the remains of ancient Rome. It helped than my younger brother escaped there and stayed, so I was able to spend long summers there and to return several times.

As it turned out, I got caught up in someone else’s dreams that included a swimming pool and a sail boat. Okay, that seems like fun. I can only say I survived.

I dreamed of a summer home in the low mountains and hills of the Eastern Townships where I was born. Not happening. No one was going to sell to my father’s daughter. But as second prize, I found a vacation home in the much higher mountains of Kern County, California where the wooded slopes breathed pine resin and sighed in the wind.

I am not the sort who dreams of having successful children. Mine succeeded by existing, but, in spite of that, they and my grandsons have achieved excellence in diverse ways.

So what are my dreams now in the winter light of my 83rd year?

Well, I dream that I will someday wrap up the executor work for the estate of that other dreamer (of sail boats and swimming pools), and I am pleased to report that I have only 3 tasks left to complete. One of them, the release of a modest bank account, which money has to be paid to a group of people I have never met, is typical of the frustratingly slow process of executing an estate. (Come back here, Boy, and I’ll give you such a slap upside the head.)

Where would he come back from? Hummm. Well, his after-life seems to be some heavenly school room where he is studying advanced physics with a side of human relations. (Can I refrain from saying ‘which he could use’?)

I’m not sure what mine will be. It will probably be a few millennia before I can stop myself from leaning back toward incarnation to make sure things are going well, not that they ever do. But, I suppose, that’s the whole point. We long and hope, yet the real lesson comes from the unfulfilled dreams, the suffering that polishes us up and fills us with light.

And those little blue birds that flew over the rainbow. My father used to see them as a child. Then they vanished. I found them again one morning as I walked along the golf course fence in Pine Mountain Club. They were singing. 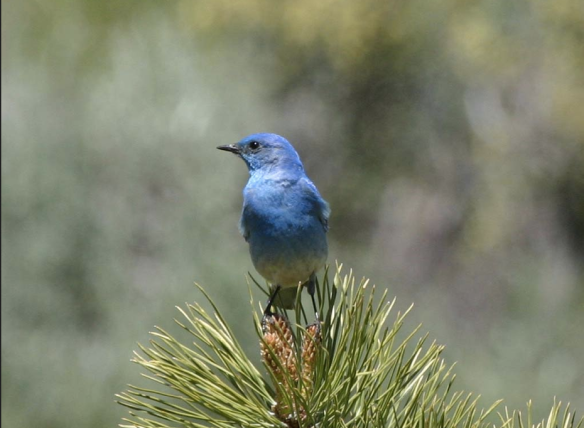